I sometimes come across certain associations of notes that make me think I “suffer” (I do not suffer, I enjoy every second) from an acute form of musical-olfactive-synesthesia. (“Synesthesia is a neurological condition in which stimulation of one sensory or cognitive pathway (for example, hearing) leads to automatic, involuntary experiences in a second sensory or cognitive pathway (such as vision). Simply put, when one sense is activated, another unrelated sense is activated at the same time.”wikipedia)

Look the two shapes in the image above and imagine they were real objects from daily life. If you were to give them a name, which one would be “bouba” and which one “kiki”? Right! “The round one would obviously be bouba” you will say, without blinking. Why? And why is the answer the same for (almost) all of us?

When the mouth makes a round shape when pronouncing bouba, the brain registers that shape and it immediately associates it with the visual that is more rounded. One the other hand “kiki” is made with sharper consonant sounds, much like the angular image A. The kiki-bouba effect goes to show that our brain subconsciously associates the linguistics of each word with the image that is similar.

As the most basic concepts of the philosophy of perception are based on visuals, how different would be the world in which the paradigm would shift towards olfaction? Imagine a kiki-bouba type of experiment applied to the most subjective of senses – olfaction. Would it even make sense? Open the cap of the perfume, breathe in, and close your eyes. What images roll before your eyes, what music do you hear, what taste fills your mouth?

I hear* in Sacred Perfume the bombastic beginning: a glistening arabian pure breed shakes its hooves, raising up in the air tiny particles of the desert sand, that can be felt, tasted even, scratching between your teeth and the tip of your tongue, nostrils sharpening at the feral scent steaming up after the long gallop.

Smells of sand raised in the sun, warm dunes, the spice market with fruit baskets spilled over the piles of cardamom and pepper. The dust is slowly settling, and in chiaroscuro, we see a perfect rose, with petals as beautiful and intricate as a baroque lace, carefully rendered by the olfactive painter, obsessed with details- each nervure of the leaf, each prickly thorn, in absurd detailed macro beauty. From the background, the darkness embodied in the sticky myrrh pulls in the rose, and slowly drowns it in its thick molasses. All this struggle between the sensuality of the rose and the sacredness of the base notes: eros, agape, eros, agape is sheer delight.

If  I was to assign to it the perfect song, it would be Monteverdi’s Lamento della Ninfa:

Parfum Sacre was launched by the house of Caron in 1990 and the nose was Jean-Pierre Béthouart.

If you like Caron Parfum Sacre, also try: Black Cashmere by Donna Karen 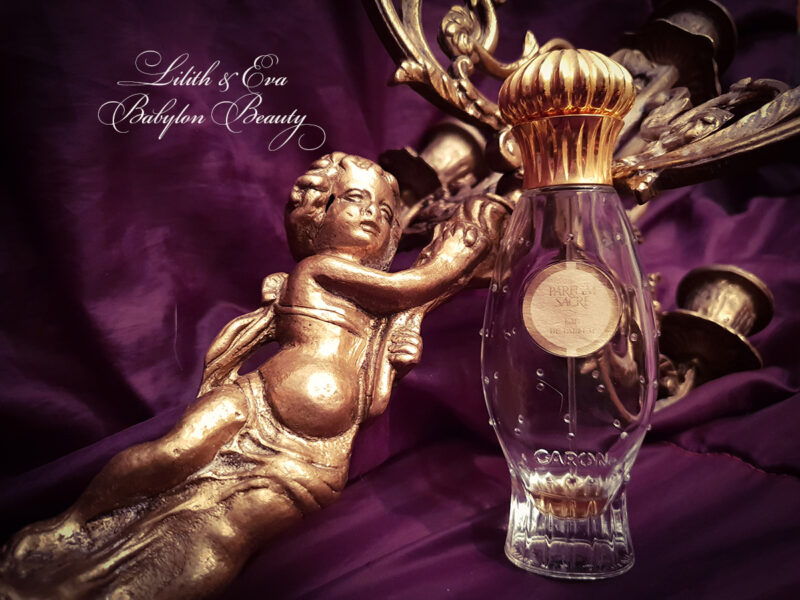